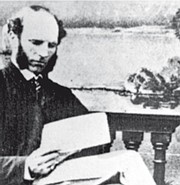 NUI Galway dates back to 1845 with the construction of the Quadrangle Building when it was founded as Queen’s College Galway. One of its earliest academics was John Elliot Cairnes. He was an Irish economist who restated the key doctrines of the English classical school in his last and largest work, Some Leading Principles of Political Economy Newly Expounded (1874).

In his first book, The Character and Logical Method of Political Economy (1857), Cairnes emphasized the abstract deductive nature of classical political economy, arguing that, in light of political policies and principles, the classical approach could be seen as scientific and neutral. His “Essays on the Gold Question” (published in Essays in Political Economy, 1873) are considered among the most important 19th-century works on monetary theory. His research into the effects of the discoveries of gold in Australia and California revived support for the quantity theory of money. His book The Slave Power (1862) criticized slavery by outlining its inefficiencies as a system of labour. Because it was published at the time of the American Civil War (1861–65), the book influenced British opinion in support of the North.

Cairnes is also remembered for his concept of noncompeting groups, particularly in the labour market, which foreshadowed the more systematic modern treatment of imperfect competitive and quasi-monopolistic conditions.

At the J.E. Cairnes School of Business & Economics, we take our inspiration from Cairnes’ remarkable intellect, from his correspondence and publications, which are recognised internationally as outstanding pieces of scholarship, and from his willingness to challenge his students and colleagues alike to engage in innovative, intellectual research, debate and discussion.
×

Some features need cookies to work properly. Cookies also let us (a) remember your preferences, (b) collect anonymous usage statistics, and (c) manage any online ads for nuigalway.ie.